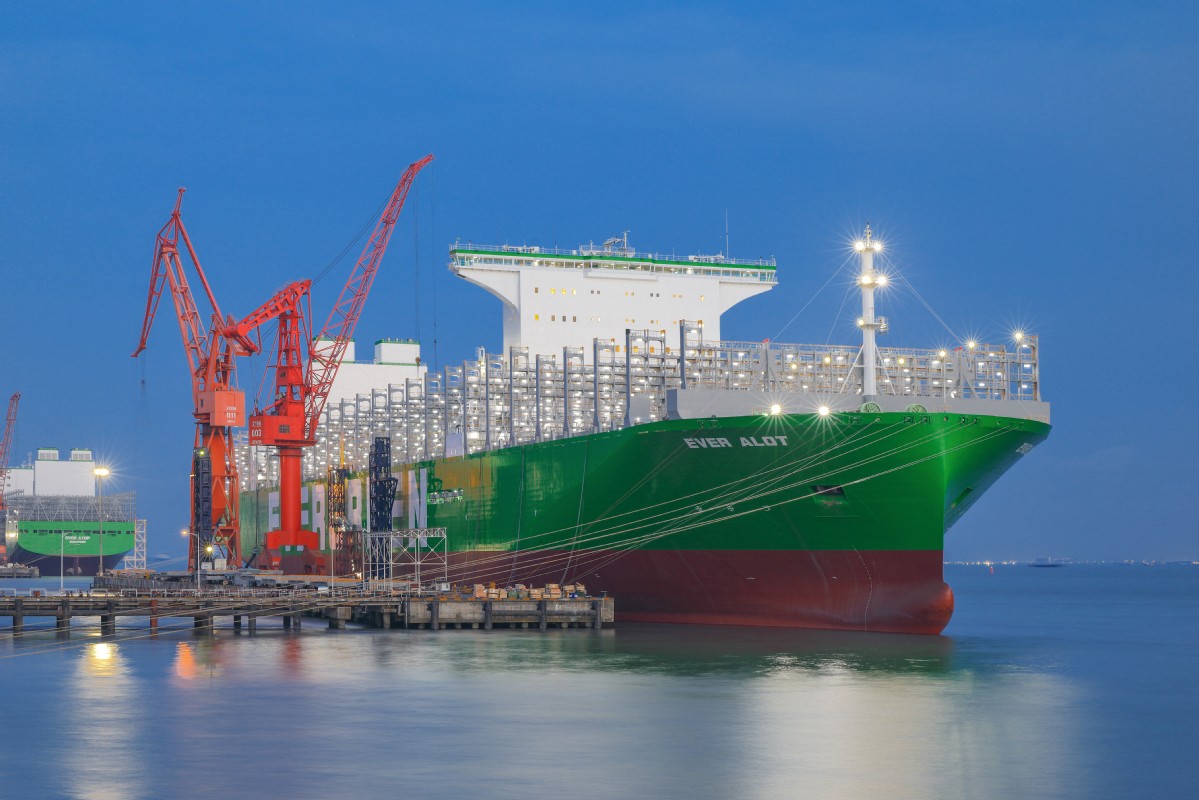 The world's largest container ship with a capacity of 24,000 TEU (twenty-foot equivalent units) was delivered by its builder Hudong-Zhonghua Shipbuilding (Group) Co Ltd on June 22. [Photo provided to chinadaily.com.cn]

After two months of watching their production volume drop, marine paint and building material manufacturers in China's eastern region are raising both efficiency and output to drive growth and offset losses caused by shipbuilders' declining production capacity in the second quarter.

By the end of May, China's major shipbuilders held executed orders for 102.2 million dead weight tons (DWT), up 20.2 percent on a yearly basis. These orders were mainly placed by foreign shipowners from Europe, the Middle East and Southeast Asia, said the Beijing-based China Association of the National Shipbuilding Industry, or CANSI.

"Since shipbuilders resumed production in Shanghai in late May and companies in other coastal provinces kept receiving orders to build new vessels, we are currently running at full capacity to produce 20,000 barrels of marine paint on a daily basis, with each barrel containing 15 liters of paint," said Xu Jiwei, director of the operation unit of Jotun COSCO Marine Coatings (Qingdao) Co Ltd, a joint venture between a unit of State-owned China COSCO Shipping Corp Ltd and Norway's Jotun A/S.

"Our two-day production volume can paint a 325,000 DWT-ore carrier," he said, noting the increase in orders was mainly driven by the world's growing demand for ships from China.

Because marine paint is categorized as a dangerous chemical product in the upstream industrial chain of shipbuilding, it is not suitable to stock in large quantities. The Qingdao, Shandong province-based company began to increase its production capacity from conducting a single shift to a double shift in April. Its production plan has been scheduled till the end of 2023.

Zhang Qiang, a manager at Nippon Paint Marine (Zhangjiagang) Co Ltd in Jiangsu province, another marine paint production area, said as the impact of COVID-19 recedes, both the company's production and sales are steadily improving. Its output jumped 116 percent year-on-year to 2,375 metric tons in May.

"So far, marine paint, power equipment and boat anchor manufacturers, as well as supporting businesses in other fields such as industrial gas, marine gears and chains, have all resumed work and production and the capacity utilization rate of the whole Yangtze River Delta region has returned to a normal level," he added.

As the shipbuilding industry involves a large number of manufacturing categories and has a long industrial chain, Tan Naifen, deputy secretary-general of CANSI, said that amid conditions of poor logistics in April and early May, many Chinese companies have accelerated their research into key materials and core technologies, and started to purchase high-end marine equipment and building materials from domestic suppliers to cast off dependence on imported products.

For instance, China Merchants Jinling Shipyard (Yangzhou) Dingheng Co Ltd, a manufacturer that specializes in building small and medium-sized chemical tankers and a subsidiary of State-owned China Merchants Group in Jiangsu province, has begun to buy special steel plates from domestic steel makers to deliver orders to its European clients.

Li Jianing, deputy head of the product development unit at Shanghai Waigaoqiao Shipbuilding Co Ltd, a subsidiary of Beijing-headquartered China State Shipbuilding Corp, said that currently, all the steel plates needed to build container vessels in his shipyard are purchased from domestic suppliers. These Chinese products have already been recognized by foreign shipowners and classification entities.

Yin Haijun, assistant president of CSSC Qingdao Beihai Shipbuilding Co Ltd, said the demand for shipbuilding materials, equipment and fittings will keep growing in China as the nation will remain one of the world's leading shipbuilders in the coming years, especially in the area of new vessels with green and high-efficiency engines to meet international demand for lower carbon emissions.

The Shandong province-based shipyard currently holds executed orders for 40 ships with more than 6.2 million DWT, mainly large bulk vessels and super-large ore carriers. Yin said these orders will keep him and his colleagues busy for the next two years.