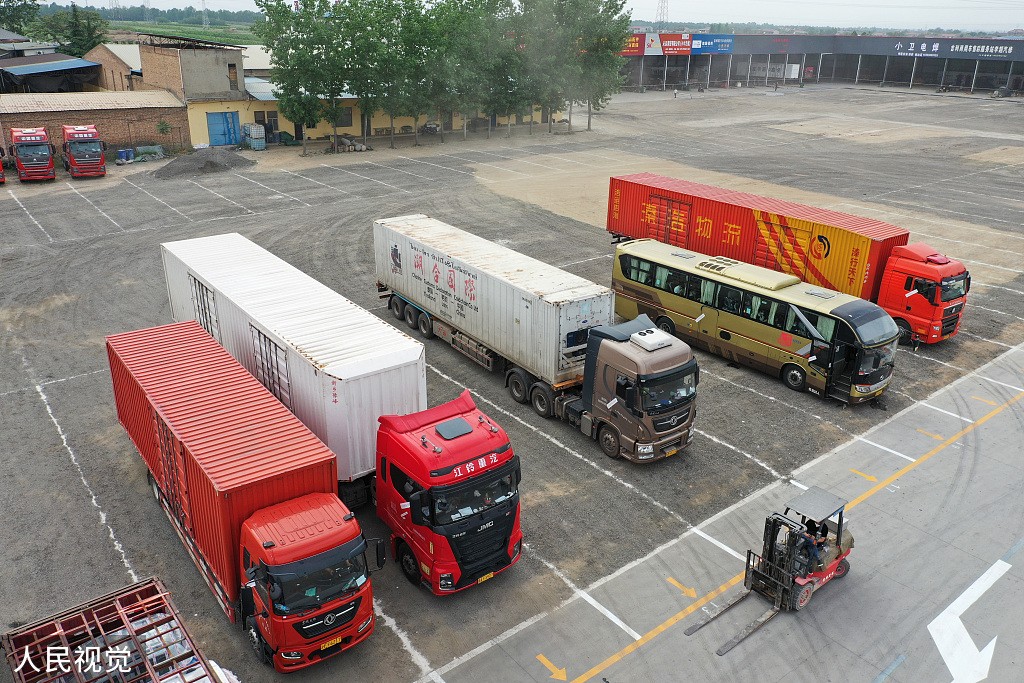 Freight trucks are seen at a highway port in Yuncheng, Shanxi province, on April 26, 2022. [Photo/VCG]

Efforts have been made to end the gridlock in logistics and transport networks caused by the latest outbreaks of COVID-19, the vice-transport minister said on Monday.

Freight transported via railways, waterways and by post from January to June is expected to exceed the volume transported during the same period in 2019, he said.

On Friday, there were 7.48 million trucks on the expressway network, an increase of 18.3 percent compared with the same period in 2019.

Also on Friday, the national railway network handled 10.7 million metric tons of cargo, and the road network transported 116 million tons of freight. Cargo and mail volume via air was 26,000 tons.

From March, when the latest outbreak of COVID-19 emerged in some areas across China, road transportation was initially clogged due to stringent measures to contain the virus in some regions.

Strict COVID-19 curbs also prompted road closures and hurt trucking services and the logistics system in many regions across the country.

Excessive measures were imposed on truck drivers in some regions, such as sending back all drivers from areas with COVID-19 cases and requiring additional nucleic acid tests even when they had a negative result from the previous 48 hours.

Warnings were issued to some checkpoints at transportation hubs for obstructing truck drivers due to overly stringent epidemic control.

A hotline was also set up to answer truckers' questions and receive feedback. More than 125,000 requests have been answered promptly, Zhao said.

"We collect problems from the hotline and make sure those regarding clogged transportation are solved efficiently," said Cai Tuanjie, director of the ministry's transport department.

"In general, we have required relevant departments to solve truckers' problems on the road within two hours, and answer requests regarding local policies in three days," he added.

In Shanghai, one of the hardest-hit cities during the outbreak, transport and logistics have gradually resumed, Cai said.

The city's 104 toll stations and 24 service areas on expressways are all open to the public, and truck traffic on the road has returned to the volume before the epidemic.

The country has also expanded infrastructure construction and investment to boost the economy.

From January to May, the nation launched 120 new expressway construction projects extending a total of 3,600 kilometers and receiving 182 billion yuan ($27.2 billion) of investment.

In the first five months of this year, 934 billion yuan was invested in national road construction projects, a year-on-year increase of 7.6 percent.