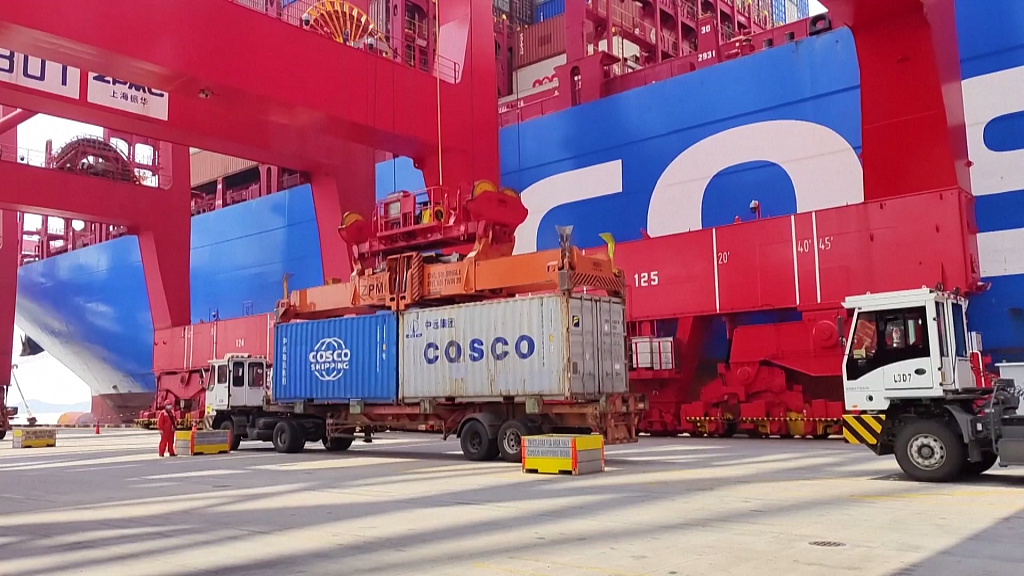 SHANGHAI -- As Shanghai steps up resumption of businesses after containing the recent COVID-19 resurgence, Shanghai Port, a major transportation hub, has seen its container throughput recover to over 80 percent of normal capacity.

According to the Shanghai International Port Group Co Ltd (SIPG), the container throughput of the port reached 110,000 twenty-foot equivalent units (TEUs) per day on Tuesday, while its normal handling volume was around 130,000 TEUs per day.

To tackle logistics bottlenecks caused by COVID-19, especially road congestion, the Shanghai Port has diversified transportation methods in cooperation with shipping companies and the railway department to stabilize supply and industrial chains in the Yangtze River Delta region.

In April, water transfer accounted for 65 percent of the port's total throughput, while the proportion of rail-sea intermodal transit also reached a record high, according to the SIPG.

The port completed a container throughput of over 3.08 million TEUs in April, recovering to 82.4 percent of that of the same month last year, said Li Guoping, an official with the Ministry of Transport, earlier this month.

For nearly two months, more than 20,000 employees have been working in the Shanghai Port under closed-loop management to maintain its daily operation, said Zhou Yong, a staff member of the production and business department of SIPG.

The overall operation at all container terminals of the port has remained stable, with the support of an intelligent remote control system that enables the handling of a container to be completed in two minutes on average.

The Shanghai Port had in advance expanded the container yard to 600,000 square meters, and more sockets for cold-chain containers were installed.

"With enterprises speeding up the resumption of work and production while keeping with epidemic prevention and control, the port throughput will continue to recover," said Zhou.

With its container throughput exceeding 47 million TEUs in 2021, the Shanghai Port has ranked as the world's busiest port for 12 consecutive years.