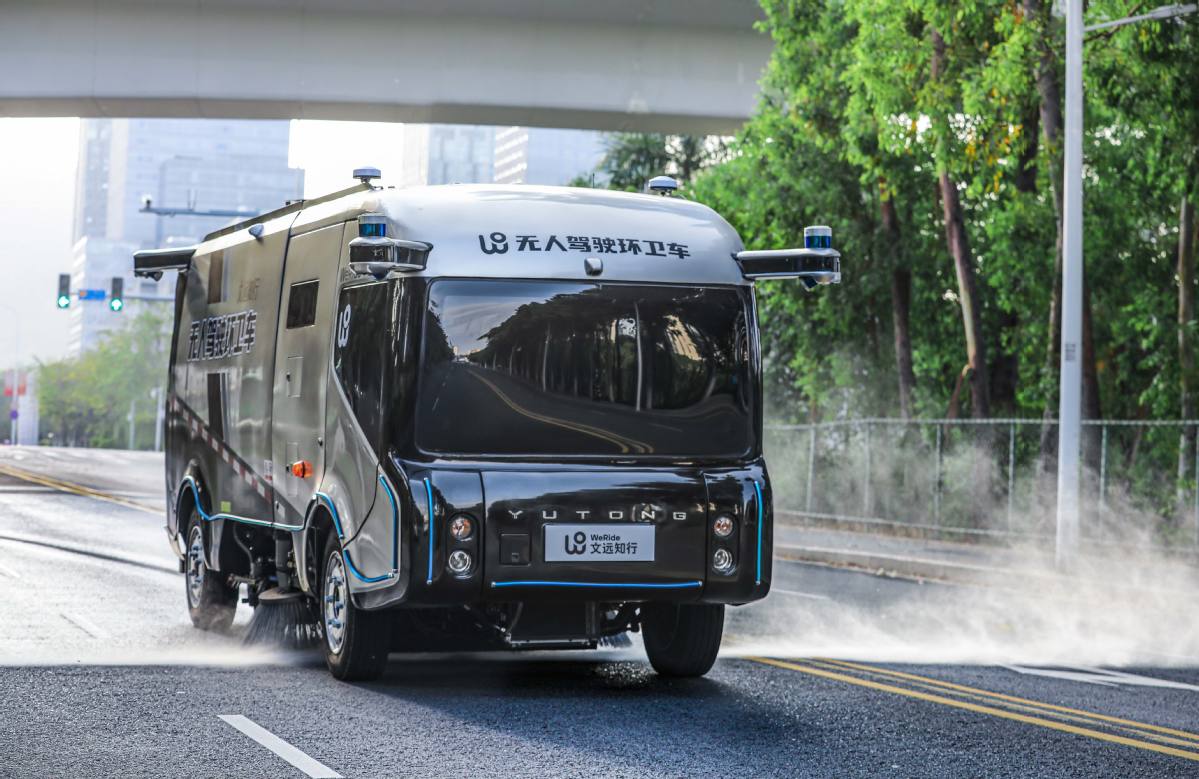 WeRide, the country's leading autonomous driving company, announced on Thursday that its robo-sweepers, with over 50 such vehicles in its first batch, will start open road tests in South China's Guangdong province this May.

Featuring a cockpit-free design without a steering wheel, accelerator or brake pedals, the robo-sweeper was codeveloped with vehicle maker Yutong Group and is able to offer urban environmental services including street sweeping, watering as well as disinfection spraying amid COVID-19.

"As the pandemic is still rampant, demand for zero-contact environmental services has been rising due to public health concerns. In case of public health emergencies, such fleets will be the most trusted resources for service due to reliable autonomous driving technology," said Tony Han, founder and CEO of WeRide.

Based on its level-4 autonomous driving technology, the Guangzhou, Guangdong-based company has developed a series of innovative products including autonomous taxis, buses and vans. It is also one of the first-batch tech companies to hold driverless test permits in both China and the United States.

For some time now, domestic tech companies have been gearing up driverless technologies in minibuses, trucks, forklifts and aerial vehicles, which are expected to enjoy huge commercial value in a variety of businesses like industrial logistics, express delivery, food take-away, fresh produce ordering and retail pharmaceuticals.

According to a report from global management consulting firm McKinsey & Co, China will become the world's largest market for autonomous vehicles, with revenue from sales of such new vehicles and mobility services expected to exceed $500 billion by 2030.

On Wednesday, Beijing J-Elephant Technology Co Ltd, a driverless forklift manufacturer, announced that it has raised nearly 100 million yuan ($15 million) in its angel and pre-A rounds of fundraising.

The angel round was jointly invested by renowned investors including Sequoia Capital China, Legend Star and Sinovation Ventures. The pre-A round attracted other investors, including Linear Capital and Challenjers Venture.

According to Lyu Feng, CEO of J-Elephant Technology, compared with traditional human-operated forklifts, the company's autonomous forklifts are safer and more flexible.

"Our latest product has no blind spots while manual forklifts have blind spots of around 25 percent. It can also be effectively integrated with existing automation tools, which will help reduce deployment costs for clients," Lyu said.

According to the company, the new round of funds will be used for research and development, talent recruitment, mass production capacity building and business expansion.

Kai-Fu Lee, chairman and CEO of Sinovation Ventures, said: "Smart logistics transportation not only affects people's daily lives, but also plays an indispensable role in industrial automation. China is pushing the world toward intelligent manufacturing, and the next generation of intelligent logistics will be a core resource for China to drive domestic economic circulation and the next global industrial revolution."