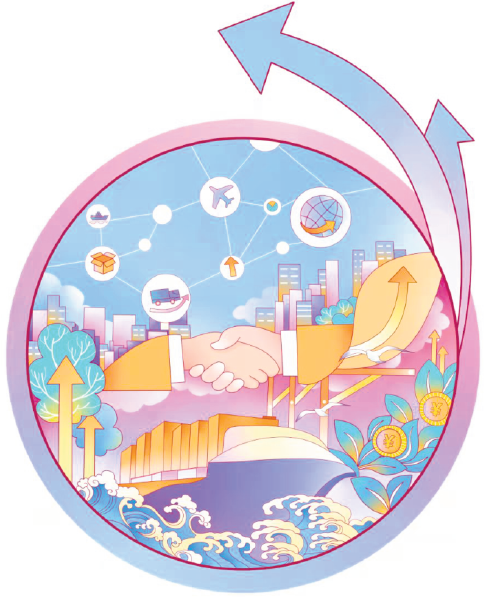 Since 2021, global logistics costs have been on the rise, the shortage of shipping containers has become acute and many ports around the world have experienced congestion, severely impacting the stability and security of global industry and supply chains. China's overseas logistics have major weak links and it is therefore a pressing task to build a global logistics system in which China plays a major role.

In recent years, China's overseas warehouses have developed rapidly, but the endeavor is still in its infancy and it has a relatively small scale. Statistics released by the Ministry of Commerce show that China now has over 2,000 overseas warehouses, twice the number in 2019, covering a total floor space of more than 16 million square meters. But that is still far from enough to meet the demand of the country's vast global market. Also, China's overseas warehouses are mainly located in the developed economies of Europe and North America, Japan and Australia, which account for over 80 percent of the total number, while in most countries involved in the Belt and Road Initiative, few Chinese warehouses have been built.

The existing overseas warehouses are not sufficient to sustain the country's robust global trade growth. For example, global e-commerce giant Amazon recently banned over 50,000 Chinese retailers on its trading platform alleging rule violations including "fake reviews" and "brushing". Owing to a lack of warehouses in the United States, large amounts of Chinese products stored in the warehouses of Amazon couldn't be shipped back to China, and had to be sold to Mexican dealers at 10 percent of their original prices before being resold to Latin American buyers. Without enough overseas warehouses, China's foreign trade is vulnerable to external uncertainties. With the advancement of the Belt and Road Initiative, more and more Chinese enterprises and products are going global. We should not only pay attention to the development of marine shipping, air transport and China-Europe freight trains, but also attach importance to the development of overseas warehouses to cater to the growing demand generated by cross-border e-commerce.

In addition to its small scale and uneven distribution, China faces other prominent problems in developing high-quality overseas warehouses. For example, most of its overseas warehouses are self-built rather than shared ones, have a single function, lack supporting facilities, and have difficulties in financing. Also, there is a lack of a unified digital platform for these overseas warehouses.

A national digital platform for overseas warehouses should also be established. Connected with national customs, foreign currency, tax and commerce systems, the platform will allow regulators to check the authenticity of trade taking place on the platform, and oversee cross-border and offshore trade and settlement. Enterprises could lease and resell warehouses on the platform. Moreover, trade data collected on the digital platform could enable the country to provide more precise and convenient services such as clearance, duty refund and foreign exchange settlement, and make the process of clearance more transparent.

China has a well-established model of cross-border e-commerce based on customs special supervision areas, which greatly facilitates the import of overseas goods. This model could be promoted to countries involved in the Belt and Road Initiative to propel the construction of bonded overseas warehouses in these countries, which will help more Chinese products find the way to Belt and Road markets via e-commerce platforms.

The author is director of the Digital Economy Division and a researcher at the China Center for International Economic Exchanges. The author contributed this article to China Watch, a think tank powered by China Daily. The views do not necessarily reflect those of China Daily.