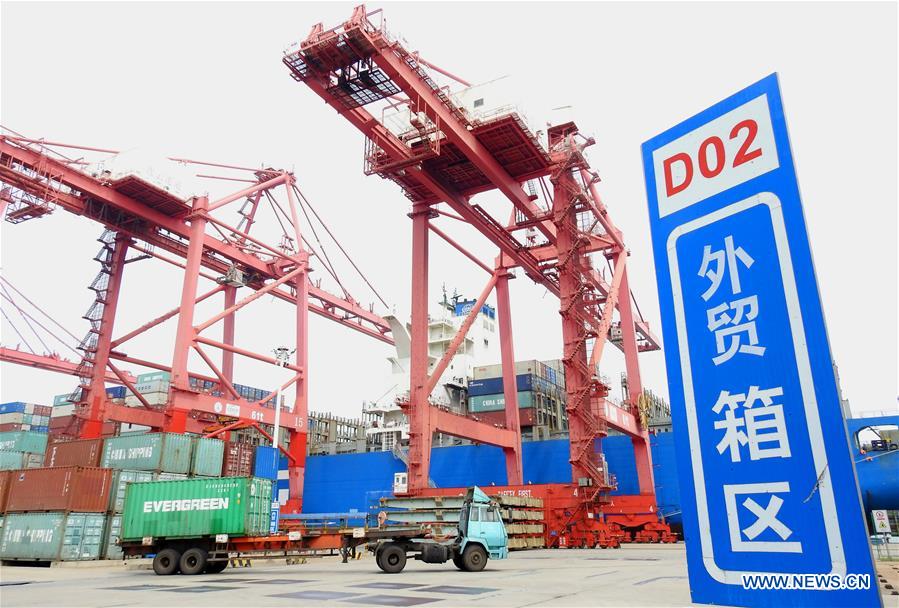 A ship is loaded with cargoes at the Lianyungang Port in Lianyungang city, Jiangsu province, on April 14, 2020. [Photo/Xinhua]

Services and digitization to spur next round of cooperation among companies

Global trade will flourish, adapt and become more digital after the COVID-19 pandemic is brought under control across the world, despite lingering doubts over the future of globalization due to supply chain disruptions, experts said.

"The more global a company's supply chain is, the more resistant it will be to the risks from a pandemic," said Qiao Jian, senior vice-president of Lenovo Group, during a dialog in Shanghai this week.

Qiao highlighted the example of Lenovo's global sourcing and local deliveries during the warm-up dialog for the Hongqiao International Economic Forum, which will run concurrently with the China International Import Expo in Shanghai in November. The theme for the dialog this week was on stabilizing global supply chains and embracing future globalization in the aftermath of the COVID-19 epidemic.

Qiao said Lenovo had faced initial disruptions in its supply chain for mobile-phone parts as factories in China were shut in late January and February. However, the company was able to respond quickly because it could source the parts from its factories in Brazil, Mexico, the United States and Japan.

"We increased the production capacity of our overseas factories to deliver the global orders," she said, adding that more than 30 percent of its supply chains are outside China.

"When the coronavirus hit those countries, we were able to restart production at our plants in China as the epidemic had been brought better under control in the country."

Qiao said that the company has been able to meet the rising demand from overseas markets for products like laptops and tablets, as more people are now working from home.

"Our global customer base and manufacturing lines have secured us both the market demand and production," she said. "It is not sensible for multinational companies like Lenovo to go against globalization."

She said the most important thing is not to retreat from globalization, but to better integrate the global and local supply chains, solve the unequal development issues and let everyone share the profits arising from globalization.

Wang Xinkui, chairman of the Shanghai WTO Affairs Consultation Center, said the COVID-19 pandemic will not hamper economic globalization in the long term, but still poses some concerns about the security of global supply chains.

Wang said that some big companies have long considered the issue, but this time the pandemic has made the issue more conspicuous for multinational companies and nations.

"Companies cannot live without global supply chains as more than 50 percent of the international trade is between supply chains," he said. 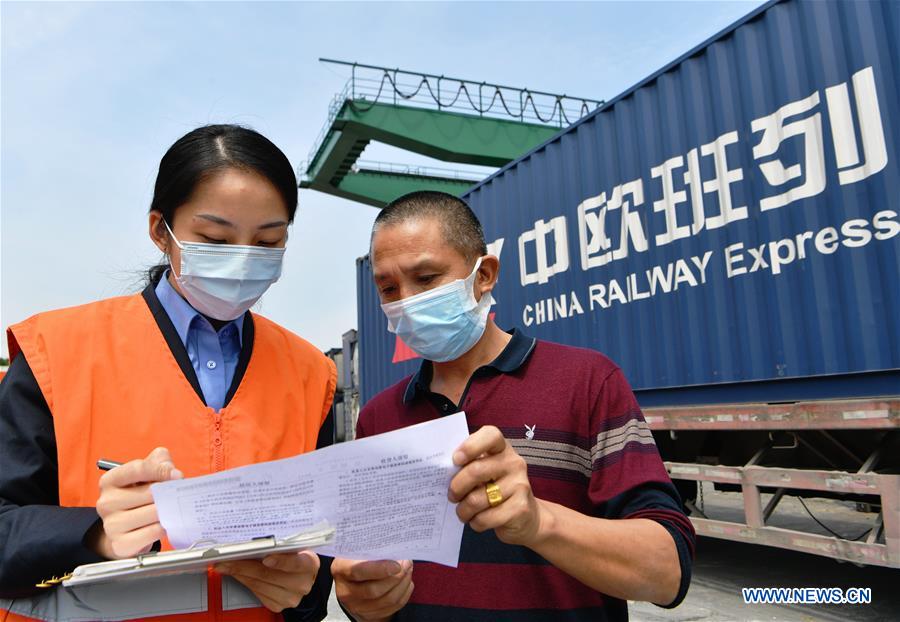 Li Ying (L), staff member with Haicang Station of China Railway Nanchang Group Co Ltd, checks medical supplies as well as electronic devices and clothes that will be loaded onto a China-Europe freight train bound for Hamburg of Germany at Haicang Station in Xiamen, Fujian province, on April 25, 2020. [Photo/Xinhua]

Jeongmin Seong, partner at the McKinsey Global Institute, said: "The second half of globalization has just started. Globalization will change, but the change does not mean de-globalization."

Seong cited three trends in the next wave of globalization: more regionalization, trade in services, and digitization.

He suggested that some of the companies may shorten their supply chains to remain closer to their markets so that they can respond quickly to situations like the novel coronavirus outbreak.

According to Seong, services trade has grown 60 percent faster than goods trade in the past decade, even though it accounts for just 30 percent of the total trade value at the moment. Cross-border data flows have expanded fifty-fold in the past decade and the pandemic has spurred an explosion of digital services, such as new media content, big data analytics and cloud computing.

"We expect these trends to continue after the COVID-19 epidemic," he said. "This will be an opportunity for China, because it is moving from the 'factory of the world' to a more high-end services-driven economy."

Seong's opinion on digital globalization was echoed by John Denton, secretary-general of the International Chamber of Commerce, who joined the discussion online from Paris.

"How do we trade in an era, in which global disruptions like the COVID-19 epidemic become more frequent? One very clear next step is to take advantage of the technological capabilities available to us to digitalize trade," he said. "Our aim is to take the analogous trading world, and turn it into a digital world."

Denton suggested that digital documents get the same legal recognition as paper documents so as to improve efficiency, reduce costs, and shorten delays. "This is just one way in which we can begin to align the trading system which we have with the 21st century context in which we live," he said.

Fabrice Megarbane, president and CEO of L'Oreal China, said: "I totally agree that globalization is irreversible, and the second wave of globalization will be based on digital transformation. Collaboration with an open innovation ecosystem will allow China to play a bigger role in the world, and vice versa. I think this is the value that will benefit all, which will be the sense of the new globalization."