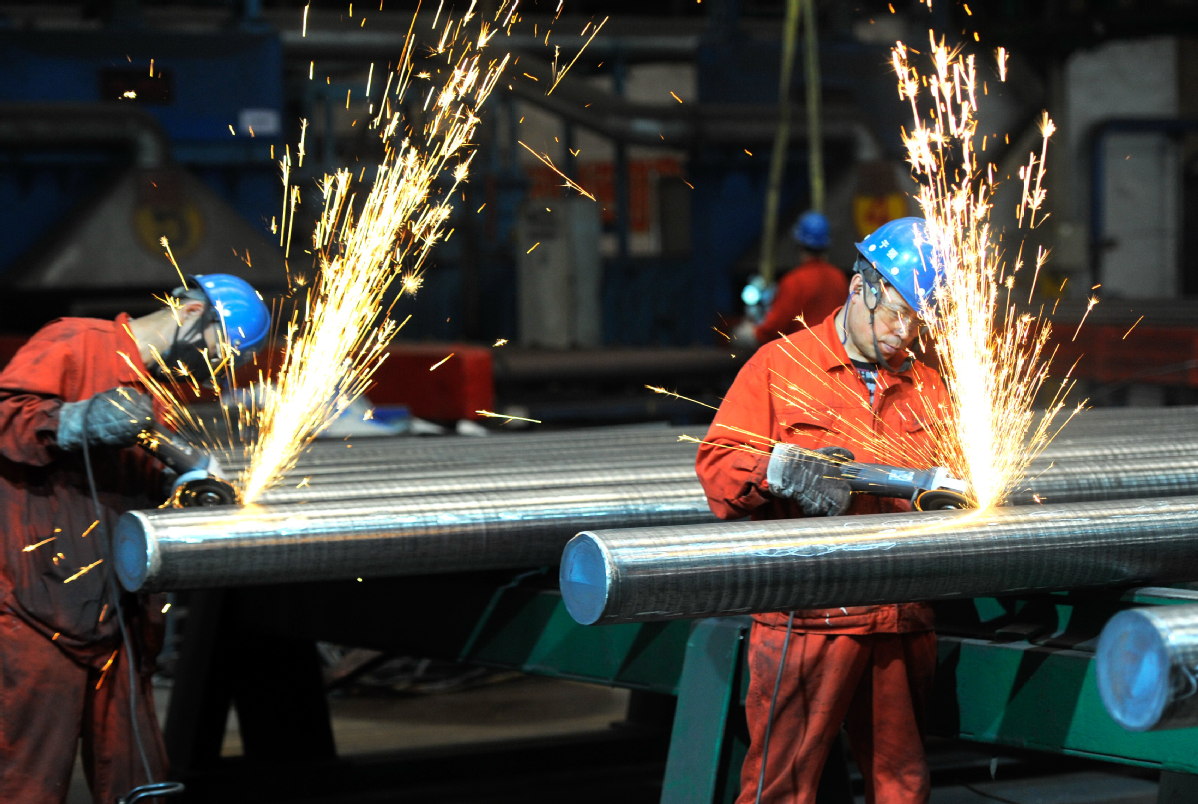 Profits at industrial firms declined at a slower pace in April as production and sales rebounded amid the nationwide restoration of economic activities, the National Bureau of Statistics said on Wednesday.

Analysts said the nation's newly-announced policy package to bail out businesses will help sustain the revival in industrial profits, with sectors related to the economic upgrade set to outperform.

The fall in profits of major industrial firms in China narrowed for the second consecutive month and stood at 4.3 percent on a yearly basis in April, substantially recovering from the 34.9 percent plunge a month earlier.

Total industrial profits in the first four months of the year stood at 1.26 trillion yuan ($176 billion), down more than a quarter from a year earlier, according to the NBS.

Revenue of industrial firms increased by 5.1 percent on a yearly basis last month, versus an 11.1-percent drop in March, while the year-on-year change in industrial production also turned positive, according to the NBS.

Higher investment returns in April as well as a low comparison base last year also contributed to the improvement, said Zhu.

Despite the recovery, Zhu said there are risks facing industrial firms. "Market demand has not recovered completely, the drop in industrial goods prices has sustained, and cost pressure is still heavy."

Zhu urged putting in place policy measures to help enterprises stay afloat through the economic fallout of the pandemic while continuing the epidemic containment measures.

Chinese officials have stressed that ensuring the stable development of businesses will be the key to securing the priorities of employment and people's livelihood, with the Government Work Report having announced a policy package to support businesses, especially small, micro and medium-sized ones.

The package included further cuts in taxes and fees, reduction of electricity and broadband prices, and ramping up of financial assistance such as postponing the deadline of redeeming loans, among other measures.

"The package, with all-round and pinpointed measures, will become a solid support for most of the quality enterprises to get through the difficulties," said Yang Chengzhang, a national political adviser and chief economist with Shenwan Hongyuan Securities.

With the implementation of supportive policies, the industrial economy is expected to continue recovering, said Yang Weiyong, an associate professor of economics with the University of International Business and Economics in Beijing.

Sectors like nondurable consumer goods, electronics and communications are likely to lead the pickup, as market demand for these sectors is resilient amid economic upgrading, said Yang.

According to the NBS, profits in the high-tech manufacturing sector rose by 55.7 percent last month, versus a 0.5-percent gain in March. Automobiles, special-purpose equipment, electric machinery and electronics were also among the sectors that saw the biggest recovery in April.

Profits of the automobile industry rose 29.5 percent year-on-year, rebounding from the 80.4-percent slump in March, indicating that the policies to boost demand for autos are taking effect.

Despite the improving conditions for the industrial sector backed by supportive policies and economic upgrading, the year-on-year change in industrial profits may remain negative in the coming months, said Wu Chaoming, chief economist with Chasing Securities.

The uncertainties in the restoration of overseas economic activities could cause head winds to the recovery in global demand and industrial goods prices, which could especially put pressure on up-stream industrial firms, said Wu.