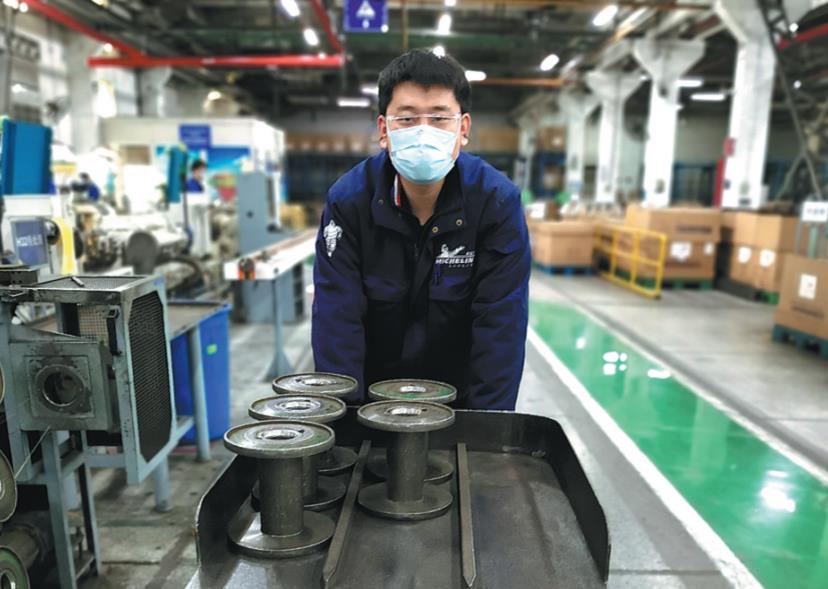 An employee works at one of Michelin's Shanghai plants that resumed operations on Feb 10. [Provided to China Daily]

Over half of the companies in China's auto industry are resuming production in the country as the number of confirmed cases of the novel coronavirus each day continues to decline.

A poll by the China Machinery Industry Federation shows that at least 60 percent of carmakers and auto suppliers had restarted their business by Feb 18. But companies in Hubei, the epicenter of the epidemic, are not expected to resume production until March 11.

Toyota Motor Corp said on Friday it planned for all four of its vehicle assembly plants in China to be in operation by the last week of February after weeks of closures, although output at some plants would be limited.

Li Zhiqiang, a production manager at FAW-Volkswagen's Chengdu plant in Sichuan province, told local media the plant is producing one car each minute. That production rate is the same as before the closure.

Li said the plant produced around 20,000 vehicles in the first two months, but it will begin firing on all cylinders starting in May after two months of adjustment. The plant hopes to recoup its losses by November and exceed the whole year's target by December.

German carmaker Daimler said its Mercedes-Benz brand had restarted production of premium passenger cars in Beijing, but added it was too early to gauge the impact of the coronavirus on Daimler's business.

The Shanghai gigafactory of US electric carmaker Tesla has resumed full production, according to news outlet Shanghai Observer.

The electric carmaker restarted production in Shanghai on Feb 10.

It has plans to completely localize its China supply chain by the end of this year.

Kamran Vossoughi, president of Michelin China, said despite some difficulties the company's operations are steadily returning back to normal.

"We are not cutting this year's growth prospects," Vossoughi said. "The demand in China may be postponed, but it will not disappear."

French automotive supplier Valeo said on Thursday that even given auto sector uncertainty, it expects to outperform the market in 2020, according to Reuters.

Valeo specializes in the design, production and sale of components and services for the automotive sector.

Its plants located outside Hubei province account for 90 percent of nominal sales in China and have resumed production.

The company said it's too early to evaluate the impact of the coronavirus outbreak in China on its 2020 projections and the industry as a whole. "We respect all the rules implemented by the Chinese authorities," said Jacques Aschenbroich, Valeo's chairman and.

Compared to carmakers and suppliers, fewer car dealers have opened showrooms for business.

A survey of 4,661 dealerships in the country show that only around 12 percent have resumed business by Thursday, according to the China Auto Dealers Association.

But many brands, including Great Wall Motors, BMW and Mercedes-Benz, have heavily promoted their products online in recent weeks as the health crisis escalated and authorities warned people to avoid public places.

Sales of passenger cars in China, the world's largest auto market, plunged 92 percent in the first 16 days of February compared with the same period a year earlier, data from the China Passenger Car Association showed.