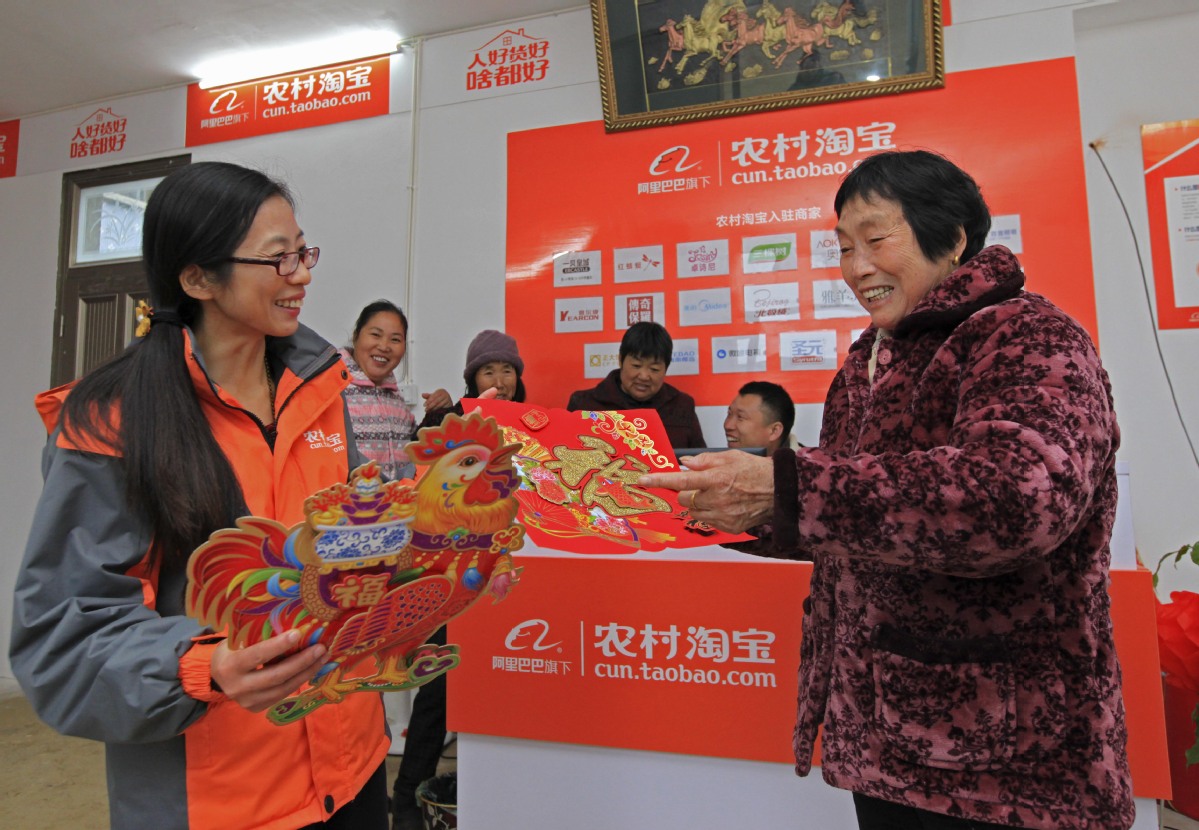 Chinese e-commerce sites are rolling up their sleeves to help farmers sell their agricultural products, a combination of philanthropy and business that contributes to the nationwide eradication of poverty by the end of the year.

Alibaba Group Holding Ltd is scheduled to launch its annual sales campaign for the upcoming Chinese Lunar New Year from Thursday, with a goal of helping farmers sell over 150 million kilograms of agricultural products during the monthlong festive season.

"Our purpose is to help farmers increase their income and make quality, yet affordable, agricultural produce more accessible to the vast consumer group," said Li Shaohua, vice-president of Alibaba and general manager of its rural business unit Rural Taobao.

Dubbed "Rural Produce and Fresh Food", the channel hosts e-shops from 832 poor counties across China. Local products are displayed and introduced through vivid story telling in a variety of media formats.

Prospective buyers are also expected to be drawn by livestreaming shows, which exhibit farmers and local government officials coming together to promote goods and discuss opportunities and challenges of local interest.

Li said the platform will look to cultivate 1,000 livestreaming hosts from poverty-stricken areas in 100 counties and help them each generate more than 10,000 yuan in monthly income. The platform will also work with media outlets such as China Central Television to curate professionally-produced content about fresh produce as well as the farms themselves.

Encouraging self-development and empowerment of the poor population through novel measures has proved to be an effective approach as China aims to achieve total poverty eradication by this year, according to experts.

"Multisectoral approaches, targeted strategies, leadership, constant innovation such as using e-commerce to connect farmers to markets have been core enablers of poverty alleviation in China, by adding income and enhancing commitment," said Ehizuelen Michael Mitchell Omoruyi, executive director of the Center for Nigerian Studies at the Institute of African Studies, Zhejiang Normal University.

Other platforms have also upped the ante. Shanghai-based social commerce site Pinduoduo said a dedicated project that sells farm produce from poverty-stricken regions earned "record revenue" and is on course to make the endeavor into a regular poverty relief initiative with the assistance of information technology.

E-commerce major JD said in the first half of 2019 people spent 6.6 times that of the previous year on agricultural produce from poor counties via its platform. In just three years' time, sales of dragon fruit, pineapple and avocado from rural regions surged 8, 3.3 and 3.4 times by the middle of last year, JD's data showed.

"E-commerce-powered poverty elimination is expected to gain bigger momentum this year, as the internet facilitates not just the consumer end (i.e. making it easy for people to purchase) but the industrial end, meaning research and development, manufacturing and logistics for agricultural produces can be customized and automated through the adoption of artificial intelligence, big data and cloud computing," said Li Yongjian, a researcher of the internet economy at the Chinese Academy of Social Sciences.

China has vowed to eradicate poverty in all poor counties and regions by this year to build a moderately prosperous society in all aspects.