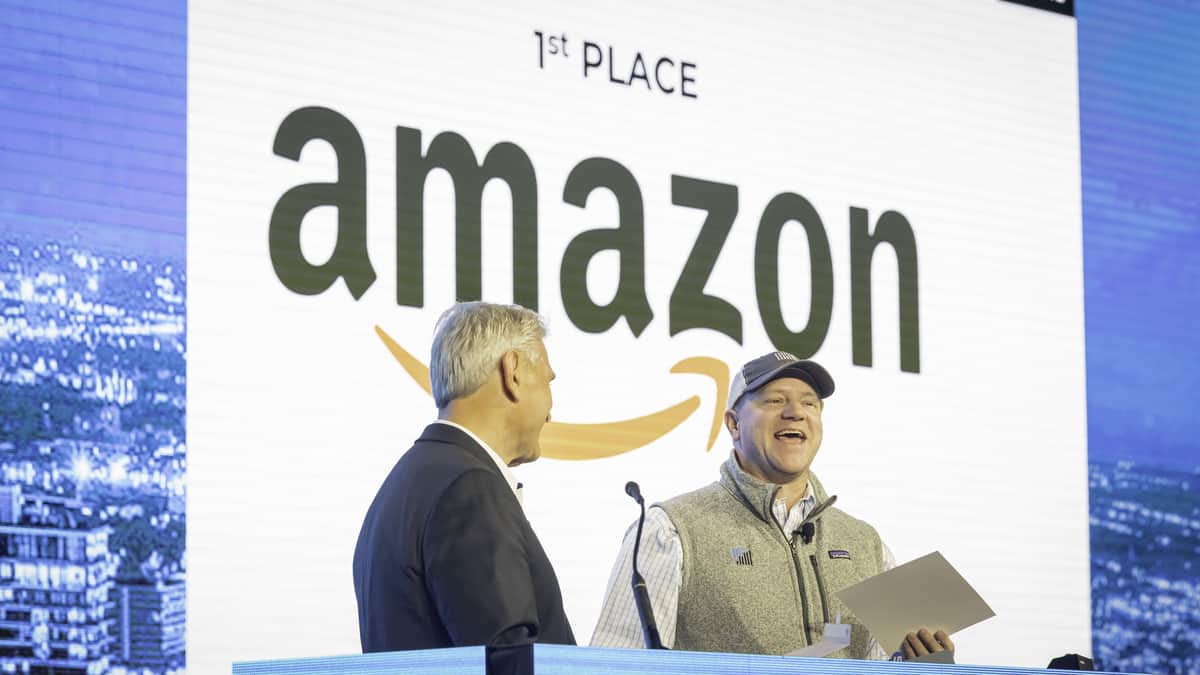 Looking at the retailing and logistics colossus that Amazon.com. Inc. (NASDAQ:AMZN) has become, it’s hard to comprehend how the company went about its delivery business 20 years ago. Unless you were there.

David Glick bore witness. Glick worked at Amazon from 1998 to 2018. From 2012 to 2017, Glick oversaw all the technology that underpinned Amazon’s global transportation and fulfillment. It was a defining time. It coincided with Amazon building out its shipping network and utilizing the warehouse robots it inherited after acquiring Kiva Systems for $775 million in 2012. Glick remembers when all of Amazon’s packages were prepped for pickup by one of the big parcel carriers. Fulfillment and routing information was plotted on spreadsheets. The only decision concerning geography was whether the goods were moving to and from the East Coast or West Coast. There were no delivery guarantees, and the product got to its destination whenever it got there, he said.

Glick was also there as Amazon permanently transformed U.S. commerce. It created an industry that, in the U.S. alone, transacts between $2 trillion and $4 trillion a year, half of which Amazon controls. Amazon took the remarkable step of building its own shipping and logistics network supporting the outbound distribution of products bought by consumers on its storefront. It has established delivery standards that rivals of all types will struggle to meet, let alone exceed.

Today, Amazon has more than 500 nodes in its shipping network. It has become the nation’s fourth package delivery company, joining FedEx Corp., (NYSE:FDX), UPS Inc., (NYSE:UPS) and the U.S. Postal Service (USPS). It has a fleet of 46 aircraft and will have 70 by the end of 2020. It owns 20,000 branded truck trailers and has access to thousands of power units. In the U.S. alone, it operates 467 warehouse-type facilities, which include 161 fulfillment and return locations, 57 inbound and outbound sortation centers, 158 delivery stations, and 53 hubs dedicated to its Prime Now two-hour delivery service, according to data from MWPVL International, a consultancy. Amazon’s Prime product launched in 2005 with two-day shipping guarantees. Today, millions of Prime items are eligible for one-day shipping. Amazon’s warehousing and transportation services are available to any seller on its platform.

Amazon is spending many billions of dollars each year to perform transportation and logistics at levels that it believes will exceed those who’ve been doing it for decades, or even more than a century. Amazon also thinks it can build a better IT mousetrap than either FedEx or UPS, firms that have spent billions over the decades to expand and refine their respective technologies.

The tab for Amazon’s transport and IT investments has accelerated dramatically since it said earlier this year that it would shift its Prime guarantee to one-day shipping from two. The company spent $9.6 billion on worldwide shipping in the third quarter, a 46% year-on-year increase, with a good part of the increase to support the one-day guarantee. Because it faces the dual challenge of executing ever more demanding customer commitments while driving down its logistics costs, there is little doubt it will continue very heavy IT spending.

Amazon’s technology has two pathways. Internally, it’s about the dollar. Amazon’s scale is such that a second’s efficiency savings per order means serious money. As a result, massive investments in such tools as machine learning are essential if the company is to honor its customer commitments and do it efficiently; individuals would be overwhelmed by the task. The endgame could be game-changing: Amazon wants to consistently predict what customers need and when they will need it, and to position the inventory so it can be picked, packed and shipped quickly and efficiently.

Looking outward, it’s about transparency to the user, a credo that carried over from the company’s retail culture. One of the key lessons, according to a company spokeswoman, was to “use technology to get out of the way and empower thousands of enterprising small businesses to directly connect with customers and grow.” On the freight side, much of the focus is on smaller, independent truckers, many of whom never had access to high-end business tools before. For example, they can onboard online within two business days and can post capacity and book loads with all-in pricing included, the spokeswoman said.

According to Glick, Amazon has already rolled out much of the “game-changing stuff” on the freight IT front; his favorite innovation is the driver app that merges lists of drivers who are crowdsourced through Amazon Flex and those who run for the company under the guise of its Delivery Service Providers, or DSPs. Much of what will come next, he said, will be improvements to the prototypes that will improve package density — or packages per stop — and will drive down unit costs.

Another area of improvement will be in the sub-category of final-mile delivery that’s become known as the “last 50 feet.” When delivering to urban locations like high-rises, knowing every nook and cranny of a property is essential to getting packages delivered fast and reliably. Companies like UPS have the same driver delivering every day, Glick noted. As a result, the driver knows the entrances, parking spots, the doorman and other important facets of access. Amazon, by contrast, typically will not send the same driver to a location every day and will rely on machine learning to master those access points and relay them to any driver delivering the goods, according to Glick. “It will take all that information that UPS drivers have in their heads and put it in the technology,” he said.

Amazon thinks it’s in a good place. Not only does its core business continue to cook, but it is muscling into shipping and logistics at a time when the industry is being transformed by the technology it feels most comfortable with. Sooner than later, it will have the infrastructure and technology in place to regularly offer logistics services to companies outside its retail network. Skeptics need only remember that Amazon’s cash-cow cloud service, AWS, was built to support its own operations before it was turned outward.

“What’s overlooked is that Amazon is moving closer to offering 3PL services to companies and not just sellers,” said Brittain Ladd, an e-commerce consultant who has followed the company for years. “It is plausible that within a few years, Amazon will be winning another award: Best 3PL.”

For its efforts, its moxie and its trailblazing, Amazon earned the top spot on FreightWaves’ FreightTech 25 list for the second consecutive year. The FreightTech 25, chosen from the FreightTech 100 initial list, highlights the most innovative and disruptive companies across the freight industry, featuring upstarts and traditional powers. The award was presented Nov. 13 at FreightWaves LIVE Chicago.