India’s second-quarter GDP data is to be released on November 29. In the recent past, auto sales, consumption, real estate sales and bank credit data have pointed to a demand slowdown. India’s industrial production shrank for the second consecutiv... 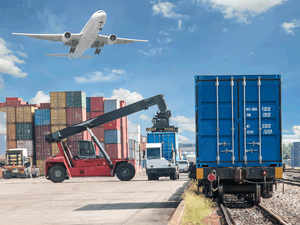 MUMBAI: The slowdown in India’s economy is beginning to manifest in the logistics industry, with top companies such as DHL Express, Allcargo Logistics, the logistics arms of Mahindra & Mahindra and retail behemoth Future Group, and the Warburg Pincus-backed Stellar Value chain witnessing the impact of tepid business on the pace of growth. Some of the companies have also deferred planned expansions, and are setting relatively modest revenue targets.

“There is a little bit of slowdown. We are expanding 5-10% slower this year than the last. The slowdown has been the most visible in the August-September period,” RS Subramanian, senior vice president and managing director, DHL Express India, part of Deutsche Post DHL Group, told ET in a recent interview. DHL operates the largest courier service in the world.

“The slowdown in the automotive sector is the most talked about. Having said that, there are some industries, such as pharma and life sciences, which are still healthy,” he said.

Revenue has not declined for the company and there is no change in its medium-to-long-term expansion plan at DHL Express.

Future Supply Chain has seen a “mellowing of demand in the first couple of quarters of this financial year,” said its managing director Mayur Toshniwal.

Toshniwal said Future Supply Chain has postponed the construction of some new warehouses. The company was supposed to add up to 3 million square feet of warehousing space this year but will now add 2-2.5 million, he added. Its earlier plan was to spend ?250 crore this year on new warehousing space, and that budget has now been cut to ?180 crore-?200 crore.

Revenue projections for Mahindra Logistics may be “recalibrated given the current economic environment,” said its new CEO Rampraveen Swaminathan.

Allcargo Logistics has seen a slower growth in exports. It will also miss its $2-billion revenue target for 2020, its senior management said in a recent interview.

India’s second-quarter GDP data is to be released on November 29. In the recent past, auto sales, consumption, real estate sales and bank credit data have pointed to a demand slowdown. India’s industrial production shrank for the second consecutive month in September, its worst performance in the series that began in April 2012.

While many companies haven’t seen a decline in revenue growth due to addition of new customers, sales for traditional customers have taken a hit.

Anshuman Singh, chairman of Stellar Logistics, said that while the company penciled in 25% growth from its traditional customers, the actual growth has just been 5%.

“However, we are still growing aggressively at 100% every year due to our new customer acquisitions, new warehouses and new company acquisitions. Due to the economic slowdown, our long-term plan of 50 million square feet of warehousing space (from 5 million currently) and 50,000 trucks in five years may happen not in five years but will happen in six or seven years,” he added.

Transportation has seen the most significant impact of the slowdown, with companies cutting down plans to expand fleet. “The Indian logistics sector’s struggle to grow profitably in a market marked by tight margins and rationalised volumes continues. Transportation, particularly road transport being the biggest segment of the Indian logistics sector, is feeling some heat. The temporary dip in transport volumes has resulted in some companies taking measures including rationalising routes, manpower and new capacity orders,” said Prahlad Tanwar, partner and logistics expert at KPMG. Sumit Sharma, co-founder of logistics startup GoBolt, said the company has cut by half its plans to increase its fleet size by 100 this year. It operates a combination of owned and leased fleet of 500 trucks.