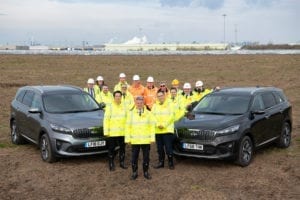 Kia Motors is expanding its car distribution centre at Stallingborough near Immingham to 52.6 ha as a result of the acquisition of 16.8 ha of land from Associated British Ports. The additional space will allow it to store up to 8,000 more cars.

The distribution centre is three miles from the port and is the hub for all Kia cars entering the UK from its factory in Slovakia as well as its Korean factories.

The new facility will have a separate transporter entrance allowing Kia flexibility in its utilisation.

The multi-million pound development has been awarded to Clugston Construction. The work will take 32 weeks and involve moving over 200,000 tonnes of soil, laying 33,000 tonnes of tarmac and painting 43 miles of white lines. The site is due to be fully open in November 2019.