Today is the second day of Asia Logistics Trade Show.

The development of CeMAT Asia witnessed the whole process of the development and growth of the logistics equipment and technology industry in the Chinese market. Today, CeMAT Asia has become a weathervane for the development of material handling and logistics technology industry in Asia, which is closely related to the support and favor of domestic and foreign exhibitors, viewers and media friends. The organizers of the exhibition expressed their deep gratitude to all sectors of society for their concern and support for CeMAT Asia.

In 2019, CeMAT Asia will celebrate its 20th birthday, and the series of celebrations for the 20th anniversary, which will start and last for a year, will also be held at the exhibition site. On the morning of November 7, the organizers held a grand press conference at the Shanghai New International Expo Center. At the meeting, the overall image of the 20th anniversary of the Asia Logistics Exhibition was announced, and a series of supporting promotion and celebration activities were launched. The organizers will also collect and share with you wonderful pictures that have been picturesque for 20 years.

The promotion activities for the 20th anniversary will be carried out simultaneously at both ends of exhibitor promotion and audience promotion, and media interviews and video shooting for exhibitors will also be carried out in succession. Blessing manual compilation, press conference, thank-you cocktail party, VIP gathering and other wonderful activities will also be gradually launched, which is really expected. I believe that with the joint efforts of all new and old friends who love CEMATASIA, the 20th anniversary celebration of CeMAT ASIA will truly become a wonderful feast of global linkage. 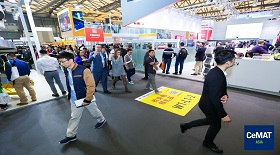