Jingdong Group's revenue in the second quarter was 1223 billion yuan


On August 16, Jingdong group released its second-quarter results in fiscal year 2018, with quarterly net revenue remaining high, net service income continued to grow at a high rate, and the operating margin of the core business mall was significantly improved thanks to refined operations and management efficiencies.

In the second quarter of fiscal year 2018, Jingdong Group's net income reached 1223 billion yuan ( about 18.5 billion US dollars ), up 31.2 % year on year, setting a new high for a single quarter. In the second quarter of 2018, non - U.S. General Accounting Standards ( non - GAAP ) attributable to ordinary shareholders made a net profit of 478.1 million yuan ( about 72.3 million U.S. dollars ) in continuing operations. Compared with 976.5 million yuan in the same period last year, the decline was 51.04 %.

Among them, net income from service business reached 11.8 billion yuan ( about 1.8 billion U.S. dollars ), up 51.0 % year on year, and continued to maintain a high growth trend. In the second quarter, the investment in technology research and development was 2.781 billion yuan, up 79.8 % from the same period last year.

As Jingdong Group's core business, the 2018 profit margin reached 1.1% in the second quarter of the fiscal year, a significant increase from 0.8% in the same period, and Jingdong continues to improve its logistics network in China's e-commerce sector as of June 30, 2018, with 521 large warehouses operating in the country, The total area is about 11.6 million square meters.

JD.com expects net income in the third quarter of 2018 to be between 1045 billion yuan and 1090 billion yuan, up about 25 % to 30 % year on year. This expectation reflects JD.com's current preliminary expectation and may change.

In addition, there is also news today that JD.com Logistics will be listed independently in 2019, but the news has not yet been confirmed. 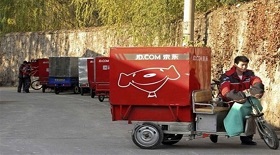