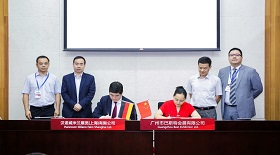 This means that Hannover Milan Exhibition ( Shanghai ) Co., Ltd., the organizer of Cemet Asia, one of the largest and most influential logistics exhibitions in Asia, will implant Cemet Asia's global brand influence and its logistics 4.0 advocacy concept into LET, which has been deeply cultivating the logistics industry in South China for nearly a decade. " The North - South linkage of the two major logistics and equipment exhibitions will form a powerful superposition of resources and form a strong support for customers, resources and industries. On the one hand, LET will upgrade the specifications and grades of the exhibition in an all-round way, expand its radiation and influence in combination with the logistics market in South China, and deepen the close connection between the countries along the the belt and road initiative line and the logistics market. On the other hand, Cemet Asia, which is about to celebrate its 20th anniversary, will also establish a strong trading platform for China's logistics development through its interaction with LET. " said Liu guoliang, managing director of Hannover Milan exhibition ( Shanghai ) co., ltd.