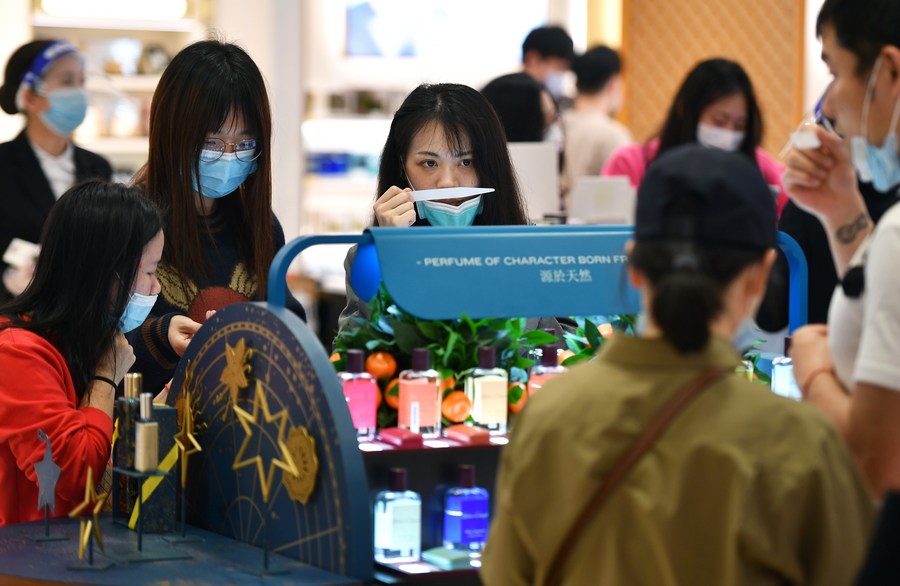 In the first half of this year, China's economy demonstrated great resilience that exceeded expectations. The risk of global stagflation is rising, compounded by mounting external instability, increasing uncertainty and the persistent triple-pressure of contracting domestic demand, supply shocks and weakened expectations.

Against this backdrop, the Chinese economy faces significant headwinds as it seeks to achieve its annual growth target. But in the second half of the year, thanks to the efficient coordination of pandemic control and economic and social development, the policy mix for stabilizing the economy will shore up growth.

In the first half of this year, China's GDP grew by 2.5 percent in real terms. In the second quarter, it grew by 0.4 percent due to the impact of the ongoing pandemic and multiple external factors. In May and June, as the effect of various policies began to set in, key economic indicators suggested a rebound. For example, the added value of large-scale industries and manufacturing PMI picked up, and the urban surveyed unemployment rate has been dropping. Investment played a pivotal role in spurring economic growth in the first six months. In a nutshell, China's economy has distinct bright spots.

Second, foreign trade has grown strongly. In the first half of the year, China's imports and exports of goods amounted to 19.8 trillion yuan ($2.9 trillion), up 9.4 percent year-on-year. Exports accounted for 11.14 trillion yuan, up 13.2 percent, and imports for 8.66 trillion yuan, up 4.8 percent. Hence, the trade surplus topped 2.48 trillion yuan. Not only has trade grown in volume but its structure is also being optimized. General trade grew by 13.1 percent, accounting for 64.2 percent of aggregate trade volume, an increase of 2.1 percentage points over the same period last year.

Third, the US Federal Reserve's rate hike has had a relatively modest impact on Chinese currency. While the increase caused the Japanese yen, British pound and euro to depreciate, the RMB remained relatively stable against the US dollar, albeit with a moderate depreciation with two-way fluctuations. This reflects the resilience of China's financial system and its strong economic fundamentals.

Fourth, China's industrial transformation and upgrading has accelerated. In the first half of the year, the value added in the high-tech manufacturing industry grew by 9.6 percent year-on-year — 6.2 percentage points faster than all large-scale industries. Investment in high-tech manufacturing and service industries grew by 23.8 percent and 12.6 percent, respectively. Meanwhile, various policies have facilitated the flow of capital and resources to empower a low-carbon economy.

The stellar performance of the Chinese economy in the first six months is primarily due to effective implementation of a policy mix coordinating the pandemic response with economic development. This mix has proved effective in ensuring the smooth functioning of logistics and supply chains — especially in shoring up China's 160 million market players, including small, medium and micro enterprises and the self-employed.

In the first half of the year, the CPI as a whole was running at a low level, averaging only 1.7 percent. It has picked up in recent months, reaching 2.5 percent in June, in line with the policy target of around 3 percent. Meanwhile, the PPI fell month-on-month, from a peak of 13.5 percent in October last year to 6.1 percent in June this year. In particular, prices of basic consumer goods remained stable, thus providing robust support for the "vegetable basket project" and "rice bag project."

Food prices have remained relatively stable as the market supply has grown, thus ensuring the supply of basic essentials. The price hike upstream is bound to be transmitted to consumer goods, and so the recent trend of moderate gain in CPI may continue, but within a controllable range. PPI has dropped, but the second half of the year may still see some upward pressure.

Global inflation has remained elevated and is reflected in the rising prices of primary raw materials, such as food, oil, natural gas, iron ore and coal. As an externally oriented economy, China relies on imports for its primary commodities, and so domestic supplies only partially offset imported inflationary pressure. Rising prices of raw materials lead to higher industrial costs, which means repercussions for China as a large manufacturing country. Small, medium, micro and private enterprises in the middle and lower reaches are set to bear the brunt.

In the first half of the year, China's foreign trade grew by a remarkable 9.4 percent. Imports and exports to major trading partners, such as ASEAN, the European Union, the United States, Japan, South Korea and countries involved in the Belt and Road Initiative saw growth. Moreover, exports of high value-added electromechanical products, trade in services and digital trade are growing at a faster pace. New industries and models are developing faster, and the proportion of general trade is increasing. Trade with Belt and Road countries is growing faster than average. And private enterprises account for a larger portion of China's exports.

In the second half of the year, China may well face the headwind of shrinking external demand. In addition, the rate hike by the US Fed and the devaluation of the Chinese yuan will also work against China's imports, a problem compounded by other uncertainties in trade and the international environment.

That said, China's economy is resilient, as it is supported by unparalleled industrial chains. The country will continue to promote reform and opening-up, optimize the business environment, increase investment in research and development and promote the transformation of the foreign trade mix. But we still need to bear in mind the prospect of slower trade growth.

Looking ahead, China's economy faces multiple challenges and potential risks. In the short term, several factors will weigh on economic recovery, including imported inflationary pressure, high unemployment among youth, subdued consumer spending, a profound adjustment in the real estate market and turbulence in global financial markets. In the long run, an aging population, a shift of gears from old to new growth drivers an heightened competition between China and the United States will also pose challenges to the sustainable development of the Chinese economy.

China's major economic indicators have stabilized and are on the rebound. If the trajectory of the past two months is any guide, I expect China's economy to rebound strongly in the third quarter, with GDP growth reaching over 5 percent and momentum continuing into the fourth quarter, but range-bound at 6 percent. As for 2023, China's economy is expected to return to normal, with GDP growth reaching 5.2 percent. Over the course of the 14th Five-Year Plan period (2021-25), China's economy is expected to maintain an average growth rate of around 5 percent.

The author is deputy Director of Economic Policy Commission.